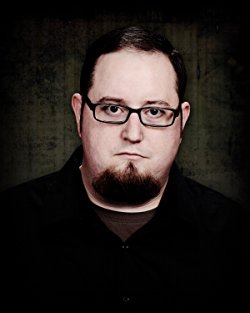 Today, I’d like to introduce a talented writer whose books have been on my radar for some time now: Thomas S. Flowers. His new book Conceiving (Subdue Book 3) came out recently and I had the pleasure of reading it over my winter break. If you consider yourself a fan of high-quality supernatural horror, I urge you to check it out along with the rest of the series.

I had the opportunity to interview Thomas about the new book, his influences, and how he approaches the writing process. I can’t thank him enough for dropping by.

TIM MEYER: Hey, Thomas! Thanks for dropping by. First, tell us a little about your latest novel, Conceiving, and the rest of The Subdue series.

THOMAS S. FLOWERS: Thanks for having me! Conceiving is the third book in a continuing series called The Subdue Series. Dwelling was the first and Emerging was the second. Both of those followed closely together around a group of childhood friends that grew apart as adults. War is a major conflict in the first two books as most of the characters are either veterans themselves, or were married to someone in the military. In Dwelling, a lot of focus was put into creating and introducing the characters to readers. Each one is working through their own conflicts and struggles in post war life. Some begin seeing things that may or may not be real. In Emerging, the characters are thrust back together when they are summoned by one of their friends to a strange house in a rural Texas town called Jotham. The house becomes a character with its own history as the story progresses, but this is no typical “haunted house” saga. Together or separate, they’ll have to face what lives underground.

TM: I read Conceiving as a standalone novel (excellent book, by the way). Not having read the previous books in the series, how loose or connected are they in relation to each other?

TSF: Going into a third book, I wanted the series to continue, but I didn’t want new readers to feel forced to read the first two books. That’s asking a lot, I think. Not just monetary, but time. So, knowing the end to Emerging, there was going to be at least two carry-overs from the first books. Bobby Weeks and Luna Blanche. Luna was a minor character in Dwelling and Emerging, one that I wanted to explore more. She actually has a rich history that I had a lot of fun discovering. And Bobby naturally would crossover into this new book. I think a part of his curse is surviving when no one else can. The benefit of reading the entire series is already knowing the characters and the back history intimately. Though it is explained in Conceiving, you actually witness it in Dwelling and Emerging. 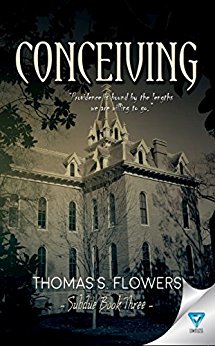 TM: Conceiving follows three main protagonists. I really enjoyed the internal/external conflicts these characters faced—such a good combination of realism and supernatural elements. Of these characters, who did you enjoy writing about the most?

TSF: I loved the dynamic between Luna and her grandmother, Memaw (Ronna). Lots of sarcasm and wit and mystery. Memaw came across to me as this elderly woman with no one left in her life but her estranged granddaughter. This isolation is part of her own doing, as readers will eventually find out. She felt very real to me, even with all the voodoo supernatural elements around her. She had a power but came across as being very meek. Her connection to John and his creation and passing on her legacy was both complex and highly entertaining for me to write. Memaw, also known as Ronna Blanche, was originally featured in a novella I wrote called Lanmò. In that story, she’s a younger woman, similar Luna’s age in Conceiving. It was based in the 1960s and shows the creation of what John Turner became, from his perspective mind you. In Conceiving, I wanted to flesh that story out more. Now Ronna is an elderly ailing woman who must pass on her story to the next generation. There’s a feeling of hesitation and desperation with her and with Luna.

TM: I know they’re like children, but which of the three Subdue books do you like (love?) the most? Which was more rewarding to write?

TSF: I always typically love the more recently published book as I feel it represents the evolution of my work, my progress to date. And I do. I enjoy Conceiving more than the others. But if you’re talking rewarding, well…Dwelling would have to be my pick. Dwelling is heavily focused on post war life for a veteran. As a veteran myself, having served three separate tours in Iraq, I pulled a lot of personal experience and memory and poured it into that book. Johnathan was one of the major characters in it, one that I most identified with. He shares stories that are my own. In the end, it took me a solid year to write both Dwelling and Emerging. In Conceiving, Bobby is still there and brings that veteran focus, but we’re stepping away from those issues in book 3, whereas it was a dominate presence in the first two books. Putting Dwelling out there took a lot. But I’m glad I did. I know not everyone enjoyed the ending. It’s not a traditional ending for a novel. For me, when asking questions if a veteran can live a normal life after experiencing something traumatic, morally and physically, the answer is usually going to be nihilistic.

TM: Any plans for future books existing in the same universe?

TSF: Oh yes! Most of all my stuff shares the same universe. In Dwelling you’ll find hints and clues of other books, including a particular armchair from my debut novel, Reinheit. But if we’re talking Subdue, Book 4, Converging, will release this spring with Limitless Publishing. Plans are in the works for a book 5. As far as an end game, a reader told me I ought to make this a 7 book series. I’m considering that option.

TM: List some books and movies that influenced your writing.

TSF: To be honest, I watch too many movies and TV shows. And just about all of them influence me in some way or another. For Dwelling, I think I had in mind a cross between An American Werewolf in London and Born on the Fourth of July with some All Quiet on the Western Front. Emerging, the same with a dash of Apocalypse Now. Conceiving was influenced a lot by Rosemary’s Baby and, strangely enough, Friday the 13th part 7.

TM: Every writer has that one author that made them step back and say, “Hey, I want to write books.” Who did that for you?

TSF: In the beginning, Stephen King did. I love his older work and read a ton of his stuff growing up. Him and R.L Stein. King’s non-fictional work, On Writing, was very inspiring. Nowadays I get more motivated by my peers. I see someone working hard, that makes me want to work hard too. I’ve also started reading books by authors I wouldn’t otherwise have read. The Strain trilogy is actually really good. It’s not avant-garde or literary or anything, but it’s entertaining. Books like that remind me I don’t need to force the literary side of my writing, I simply just need to write and be entertaining. And so long as I’m honest about it, the literary aspects will come out naturally.

TM: What’s your writing process like? Do you outline?

TSF: Everyone has their own stick. I’m a tad traditional. I longhand most of everything I write, longer projects for sure, in one subject notebooks. For Dwelling and Emerging, I long-handed the entire story before typing it up. What I did for Conceiving was longhand a section and then go and type that up, go and longhand another section, and type that up, and so on. I do not outline, never have. I’ll take notes if I feel some detail I might forget or want to use later. But for the most part, everything is fluid. The notes are in the longhand sections of notebook.

TM: What’s your favorite thing about being a writer?

TSF: Storytelling. Plain and simple. Seeing the final product is very gratifying, but what keeps me coming back for more is the feeling I get during the process. Letting out an inner voice, exploring my own characters that are unknown strangers to me. I think someone famous said this once, but I write what I want to read. Years and years of compiled movie watching defiantly helps motivate the inner voice and desire for writing.

TM: In your opinion, what makes for a great horror novel?

TSF: Wow…now that’s a tough question. Ultimately, I do not care what the supernatural or horror element is, so long as you have realistic motivations, motivations I can believe, it’ll help bring out those people we’re giving up our free time to explore and read about. Don’t just tell me about the monster in the closet, show me the boy, show me his family, the muffled arguments between his ma and pa, and maybe how his ma is sleeping with another man, and pa is away too often on business trips. And then show me the closet door creeping open and the monster inside becomes a little more real for me. PS, this is little tidbit is actually from Stephen King’s book Cujo, BTW.

TSF: I’m following more closely to my calendar this year! With a full time job and family life and then full time writing to boot, I need to schedule. My blog, Machine Mean, started its second annual “In Review” series, this year we’re taking a look at Creature Features. Lots of peers and guest writers have agreed to come on every Thursday throughout 2017 to talk about their selected creature feature movie. As far as books go, I have a collection of novellas and short stories that should release later this month called The Hobbsburg Horror. In March, TBA, Dark Designs: Tales of Mad Science, an anthology I’m running along with fellow Shadow Work Publishing gurus Duncan Ralston and Jeffery X. Martin, is set to release. In the spring, Converging, Subdue Book 4 will release. I’ll also have at least three other major projects planned for mid to late 2017. And that’s on top of my unfinished writing projects. All in all, I’m trying to stay organized and flexible with my publishing goals, but overall, I’m simply exited to get more work out there.